When it comes to Black History, Dr. Martin Luther King Jr., Rosa Parks, Maya Angelou, James Baldwin, and Muhammad Ali are often mentioned and rightfully so. But what do you know about other Black history heroes across the diaspora like Yaksuke of Japan or Jamaica’s Queen Nanny and David Fagen from the Philippines? If their names don’t immediately ring a bell, you’re not alone. There are several global Black figures that made their mark in this world, and their stories are only now coming to light.

Here Are 6 Black History Figures Across the Diaspora that you should know.

Zamor was born in 1762 in Chittagong in Bengal, which we know today as Bangladesh. Chittagong was formerly a major slave trading port, which accounted for high Sidi (Afro-Indian) presence. In 1773, when Zamor was just eleven years old, he was kidnapped by British slave traders and trafficked to France. He was eventually sold to the French king, Louis XV of France.

Inside Fete Gede, Haiti’s ‘Day of The Dead’ Celebration

Zamor ran into difficulties when he was subsequently arrested by the Girondins, another political faction active during the French Revolution, who suspected him of being a Jacobin. He went into self-imposed exile for many years, returning in 1815 following the fall of Napoleon. He reportedly purchased a house in Paris and worked as a school teacher. Zamor died in relative poverty in 1820.

When we think of the Civil Rights movement, we naturally think of the United States. In actual fact, events in the US inspired similar movements across African diaspora communities worldwide, who took a stand against racial injustice in their own countries.

One of the pioneers of the Civil Rights movement in Peru in the 50s and 60s was Victoria Santa Cruz. She was a poet, choreographer and activist. Victoria was born in 1922 in Lima, one of ten children. Coming from a musical family, she was heavily influenced by Afro-Peruvian folk music and dance, and used the performing arts as a way to explore her own identity as a black, Peruvian woman.

Together Victoria and her younger brother, Nicomedes founded the Afro-Peruvian theater company ‘Cumanana’ in 1958, and in 1966 Victoria founded another group ‘Theater and Dance from Peru’, which focused on preserving and reviving Afro-Peruvian cultural heritage. Victoria was able to use these platforms to showcase Afro-Peruvian talent, not just to a Peruvian audience but internationally. Although Victoria passed away in 2014 at 91, her legacy remains.

She is perhaps best known to contemporary audiences for her 1978 spoken word poem ‘Me Llamaron Negra’ (They Called Me Black), which has over a million hits on YouTube. I definitely recommend checking it out. 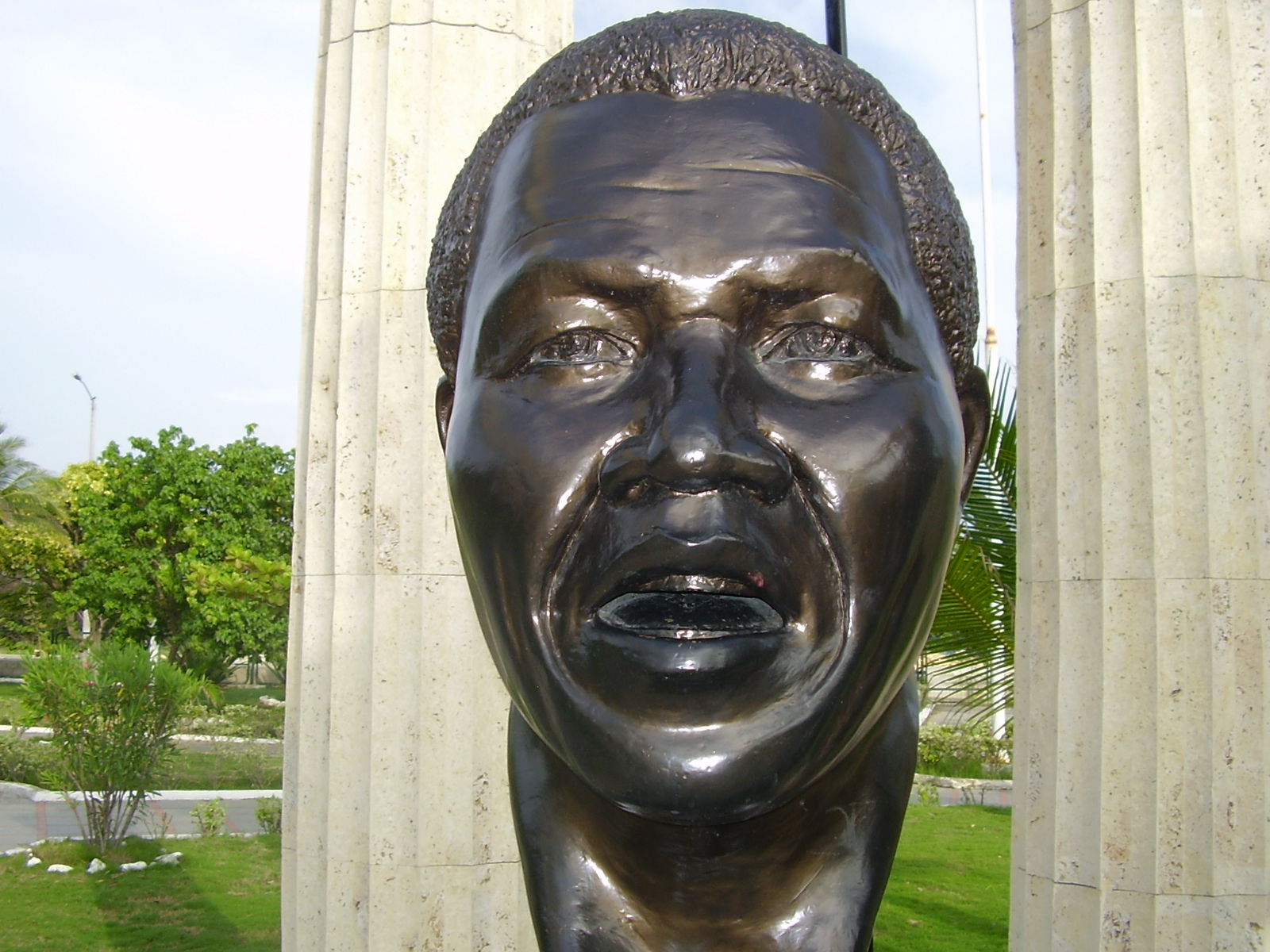 The word ‘Palenque’ simply refers to a settlement created by formerly enslaved Africans who have escaped to freedom, and throughout history dozens of palenques were formed across Latin America. The word comes from the Spanish word ‘palo’ meaning stick, as wooden sticks were used to fortify the boundaries of the settlements.

In the main square of San Basilio de Palenque you will find a statue of a man named Benkos Bioho. A member of African royalty, he was born on an island off the coast of mainland Guinea-Bissau in the late 16th century.

Benkos was captured, enslaved and trafficked to Cartagena, but in 1599 he escaped with a small group of enslaved Africans and founded what is today called San Basilio de Palenque. Benkos and his companions formed a sophisticated intelligence network and were able to guide other enslaved Africans to freedom. He was a highly skilled strategist and thwarted multiple attempts by the Spanish authorities to besiege the Palenque. In 2005 San Basilio de Palenque was recognized as a UNESCO cultural heritage site.

For those of you who don’t know, Jamaica has seven national heroes of which only one is a woman. Her name is Queen Nanny, or Nanny of the Maroons.

In the 18th century, Queen Nanny was the leader of a community of escaped enslaved Africans in Jamaica called the Windward Maroons. At the time, Jamaica was under British colonial rule, and was at one time considered the ‘crown jewel’ of the British Empire because of the vast wealth amassed for Britain from sugar production on the island.

Known to be an extraordinary military tactician, Queen Nanny outsmarted the British army on numerous occasions, despite them being larger and with superior weaponry. She was also an Obeah woman, who practiced African spirituality and was said to possess supernatural powers.

Over a period of thirty years Queen Nanny is credited with assisting over 1,000 enslaved Africans in Jamaica to escape to freedom. In 1740, conceding defeat, the British forces allocated the ‘Windward Maroons’ 500 acres of land, today known as Moor Town, on condition that the Maroons would not assist the escape of any more enslaved Africans.

Although Maria Remedios Del Valle’s story isn’t widely known internationally, she is indirectly honored every year in Argentina, as ‘Afro-Argentine Day’ is celebrated on the anniversary of her death.

But who was Maria Remedios Del Valle and why is her story important?

Known as the ‘Mother of the Homeland’, Maria Remedios del Valle is arguably one of the most famous Afro-Argentines in history. Born in 1766 in Rio de La Plata, Maria participated in the Argentine War of Independence, first as an auxiliary nurse and later as a soldier in combat. In 1813, she was wounded in battle, captured by Spanish colonial forces and imprisoned. During the time she was imprisoned, she suffered horrendous treatment and was repeatedly flogged. Maria escaped and returned to assist Argentine independence soldiers, fighting until the war ended in 1818. Her husband and her two sons were killed, leaving her all alone.

Her legacy was revived in 2013 when a law was passed declaring that November 8th would be celebrated annually as the National Day of Afro-Argentines, to commemorate the death of Maria Remedios Del Valle. The Afro-Argentine population celebrates their history and culture every year on this date

The story of Yasuke, an African Samurai, is so incredible that it sounds like the plot of a Hollywood movie. He was a 16th century African man widely believed to be from Mozambique. He traveled to Japan in 1579 with the Jesuit missionary, Alessandro Valignano. At the time Japan was not the unified nation we recognize today. Japan during the Sengoku Period was marked by civil war and divided into regional strongholds of power. Onc of the most powerful leaders (daimyos) in Japanese history was the esteemed Oda Nobunaga.

The aforementioned Jesuit missionary, Alesandro Valignano, presented Yasuke to the Daimyo Oda Nobunaga, who had reportedly never seen a black person before. Oda Nobunaga couldn’t believe his eyes and was convinced that Yasuke’s skin had been colored with black ink. He commanded Yasuke to strip from the waist up and scrub his skin, but was astonished to see that the pigment didn’t come off. Oda Nobunaga was so impressed by Yasuke’s strength and intelligence that he invited him to join his ranks.

By all accounts Yasuke learned Japanese and adapted well to the Japanese culture. He began to work in Nobunaga’s service where he trained as a Samurai. He received his own house and plot of land as well as a ceremonial Katana sword.

Meet The Antemoro People of Madagascar, With The Knowledge Of Astronomy Before The Arrival Of Europeans